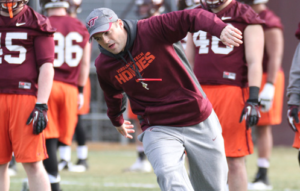 Beamer Among Candidates at East Carolina

Current Virginia Tech runnings backs and associate head coach Shane Beamer is one of the final candidates for the open head coach position at East Carolina as reported by The David Glenn Show. Current James Madison head coach Everett Withers is also still in the running according to the report. Withers served one season as the head coach at North Carolina after Butch Davis was fired in 2011. The Tar Heels posted a 7-6 record that season and lost in the Independence Bowl.

Current Tar Heel defensive coordinator Gene Chizik also reportedly interviewed among others and may well be another finalist.

Doubt it works but 4,800 people have signed online petition to get Ruffin McNeill back at ECU & fire AD Jeff Compher https://t.co/FZcsZQfJSV

The 38-year-old Beamer served as acting head coach at Virginia Tech for last season’s victory over Cincinnati in the Military Bowl while his father Frank was recovering from throat surgery. He generally received high marks for his efforts during bowl preparations, but he has no other head coaching experience in his young career but he has assistant experience in the SEC at Mississippi State and South Carolina.

During his final two seasons with the Gamecocks, Beamer served as recruiting coordinator where he helped the South Carolina reel in two top 25 classes that included talents like Alshon Jeffery, Jadeveon Clowney and Marcus Lattimore.

Interestingly, if the Pirates choose Withers Beamer would likely be a candidate for the opening at James Madison given his roots in the Commonwealth and the fact that he won’t be retained by new Tech coach Justin Fuente.

London will be the associate head coach and defensive line coach for the Terrapins. He brings a strong track record that includes both college and NFL gigs coaching defense, plus his impressive recruiting abilities that include strong ties to the fertile Virginia recruiting territory. The Terps don’t have any recruits from Virginia in the 2016 class to this point.

Shafer will be Durkin’s defensive coordinator after being fired by the Orange. He didn’t have many wins to show for his time as the head coach at Syracuse, but the defense was terrific when he ran it for Doug Marrone. In his first season in charge, the Orange defense went from 101st in the country the previous season to the top 20.

Durkin is assembling an impressive staff filled with former head coaches. That’s a smart choice for a young, first-time head coach. Maryland may well become a force when it comes to mid-atlantic recruiting.

Am told Bronco Mendenhall blew UVA folks away in the interview process.

Not surprisingly, Bronco Mendenhall will be bringing most of his staff with him from BYU. Wednesday it was announced that assistant head coach/offensive coordinator Robert Anae will coming to Charlottesville and bringing the entire offensive staff with him.

Quarterbacks coach Jason Beck, running backs coach Mark Atuaia, and offensive line coach Garett Tujague will also be on staff for the ‘Hoos. Mendenhall has said that he will run the defense himself, so it’s important to solidify the offensive staff given his background on the other side of the ball.

Mendenhall is a very interesting guy who will no doubt look to repeat the run-dominant, defense-heavy game plan that has brought success during his time with the Cougars. Think something like what Pittsburgh has done under Pat Narduzzi, though Mendenhall has said he’ll mold his system to fit the players available.

It remains to be seen if some assistant coaches with ties to Virginia will end up on staff to help with recruiting. Those decisions may be slowed slightly as Mendenhall and his staff prepare to coach in BYU’s bowl game December 19.